A Brief History of Benzodiazepines

This did not happen overnight. The story of modern benzodiazepines such as Xanax (alprazolam), Ativan (lorazepam) and Klonopin (clonazepam) begins nearly a century ago, in Germany, where chemists developed a class of sedatives known as barbiturates. Barbiturates were the first synthetic tranquilizers. 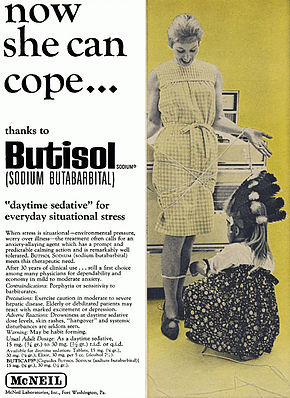 German pharmaceutical firms marketed this class of drugs under various names: Secanol, Luminal, and Nambutol. Their popularity exploded in the United States during the Great Depression of the 1930s, when over-the-counter barbiturates helped millions of Americans “take the edge off” by reducing brain activity and depressing the central nervous system.

By the time the U.S. entered World War II in 1941, Americans were consuming more than one billion barbiturates per year. Doctors and local pharmacists assured customers that the pills were harmless — a safe advance over the opiates previously used as sleeping aids.

But these glib assurances were based on promotional materials distributed by the drug makers. The truth was more complicated than the sales pitch. Although barbiturates did help many people and patients relax and get to sleep, they also produced tolerance and dependence, and carried a high risk of overdose. Withdrawal could be a tortuous and sometimes fatal ordeal.

In 1951, Congress passed a law requiring a doctor’s approval for the purchase of barbiturates. But even before the clampdown on the over-the-counter sale of barbiturates, pharmaceutical companies were on the hunt for the next generation of tranquilizers. In 1955, a chemist at the Swiss drug firm Hoffmann-La Roche synthesized the first benzodiazepine. The company called it Librium. It hit the market in 1960. 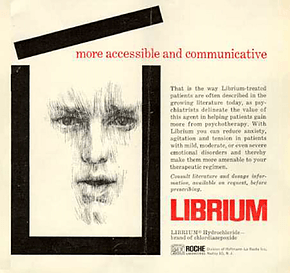 The new drug worked on similar neurotransmitters as barbiturates, and to similar effect. It depressed the central nervous system and produced a sense of calm. Echoing the promotional literature previously used to sell barbiturates, drug makers and distributors touted the new tranquilizers as a completely safe breakthrough in modern medicine. In time, however, it became clear that Librium and its fellow prescription-only benzodiazepines carried the old dangers of tolerance and dependence, as well as new side effects and an equally dangerous and difficult withdrawal.

A familiar cycle was soon in motion: Despite industry assurances about safety, stories of dependence, social dislocation and difficult withdrawal began to tarnish Valium’s reputation during the 1970s. Once again, this spurred the industry to find a new generation of tranquilizers with new names.

Both drugs were marketed to doctors and the public as “different” from Valium — safer, faster-acting, requiring much lower dosages, and carrying less risk. But the new drugs’ similarities with Valium were more important than the differences accentuated by the drug makers, who now eschewed the old label “tranquilizer” altogether, in favor of the new umbrella-term “anxiolytic.” This new rubric falsely suggested an entirely new class of drugs, with a fundamentally different neurochemistry. Their lower dosages, meanwhile, masked the new drugs’ dramatically increased potency: 1 milligram of clonazepam (Klonopin) and alprazolam (Xanax) equals roughly 20 milligrams of Valium.

In 1979, Massachusetts Senator Ted Kennedy led a Senate hearing into the dangers of benzodiazepines, of which Valium was still the best known. Ironically, Valium’s growing notoriety helped ensure the hearings failed. Rather than produce legislation to head off the growing crisis, the hearings were dominated by an industry narrative in which Valium played the fall guy — the “scary tranquilizer” — while the new and rebranded benzodiazepines coming onto market (Xanax, Klonopin, Ativan) were heralded as “good anxiolytics.”

But the truth was and remains that the entire class of drugs is equally dangerous — no matter what the industry chooses to call it, and no matter the minor tweaks separating the molecular structures of Klonopin and Xanax, which is beginning to play the role of the new “bad” benzodiazepine” in the public mind.

The industry’s rebranding of benzodiazepines was less successful in other parts of the developed world. Throughout the 1980s, the U.S. became an outlier as many industrialized countries began to strictly regulate the non-emergency use and prescription of all benzodiazepines. In the United Kingdom, for example, restrictive laws were passed against the backdrop of that country’s largest-ever class-action lawsuit, in which 14,000 patients sued the makers of benzodiazepines for knowingly downplaying and withholding knowledge of their harm potential. Though the suit ultimately stalled when the plaintiffs ran out of money, and benzodiazepines remain a problem in the UK, the British Medical Association has emerged as an important ally in the fight for benzodiazepine reform and awareness.

In 1990, the American Psychiatric Association launched a task force to investigate the dangers of rising benzodiazepine prescriptions. They found that up to 80 percent of those taking the drugs will experience withdrawal upon cessation. The British psychopharmacologist Dr. C. Heather Ashton, a leading medical expert on benzodiazepine withdrawal, estimates that roughly one in six will suffer from an extreme form of protracted withdrawal. The APA study and warnings from experts like Ashton, however, did little to impact the soaring rise of benzodiazepine prescriptions during the 1990s. As cases of dependence and disability swelled, the literature on benzodiazepine dependence and withdrawal remained minimal. This period also saw the commercial introduction and heavy promotion of so-called “Z-drugs”, popular sleep aids that carry similar risks as benzodiazepines and work on the brain in nearly identical ways. 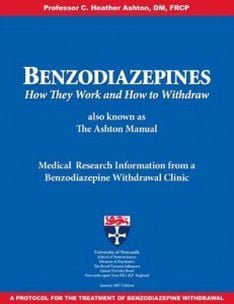 In 2002, Dr. Heather Ashton published an updated, online version of her detailed guide for managed benzodiazepine cessation, or tapering, which she had previously circulated among colleagues and patients. That guide, based on her dozen years of experience running a benzodiazepine withdrawal clinic, quickly gained renown as The Ashton Manual. It remains a trusted source for medical professionals worldwide. Its continued relevance highlights the general paucity of medical and scientific literature on benzodiazepine damage and withdrawal.

By 2008, more than one in twenty American adults were filling at least one benzodiazepine prescription. Two years later, in 2010, the Veterans Health Administration recommended against the use of benzodiazepines as a treatment for PTSD. In 2015, the British Medical Association published a major report highlighting the dangers of dependence and withdrawal posed by four classes of drugs, including benzodiazepines and Z-drugs. In 2016, the benzodiazepine crisis finally began to gain notice from state and federal agencies in the United States. The NYC Department of Health and Hygiene, as well as the state of Pennsylvania, issued “prescribing guidelines” recommending against use longer than several weeks; that same year, the FDA issued a black box warning against combining benzodiazepines with opiates.

Today, the number of prescriptions continues to rise, as does the size of the benzodiazepine-injured community. Nearly four decades after Senate hearings on the dangers of benzodiazepines, research into these drugs and physician knowledge remain woefully inadequate. The need for action grows more urgent with every passing day.