The pharmaceutical industry has a long history of romanticizing language. When the word ‘withdrawal’ was thought to evoke negative feelings in relation to psychiatric drugs, the term ‘discontinuation syndrome’ was euphemistically substituted to lower any apprehensions in patients about taking them. The same is true with benzodiazepine dosing. Patients are often told, usually inaccurately, that they are on a tiny or low dose of a benzodiazepine, misleading patients in two ways. The first is that benzodiazepines are not available in truly low doses. The doses may sound low, but, when equated to other benzodiazepines, they are not. The second is that “low” doses are somehow safer. Any dose can create physical dependence and withdrawal syndromes if used consecutively for more than a few days to a few weeks.

When patients, physicians and legislators attempted to hold the makers of Valium accountable for the harm they caused, the label ‘tranquilizer,’ the term ‘anxiolytics’ was introduced. This new term described a newer crop of benzodiazepine tranquilizers—Xanax, Ativan, Klonopin—that were more potent but carried smaller dosage labels, deceiving patients into thinking that they were taking a smaller amount. In reality, they were actually taking a dose as much as 20 times more potent than an equivalent dose of Valium. 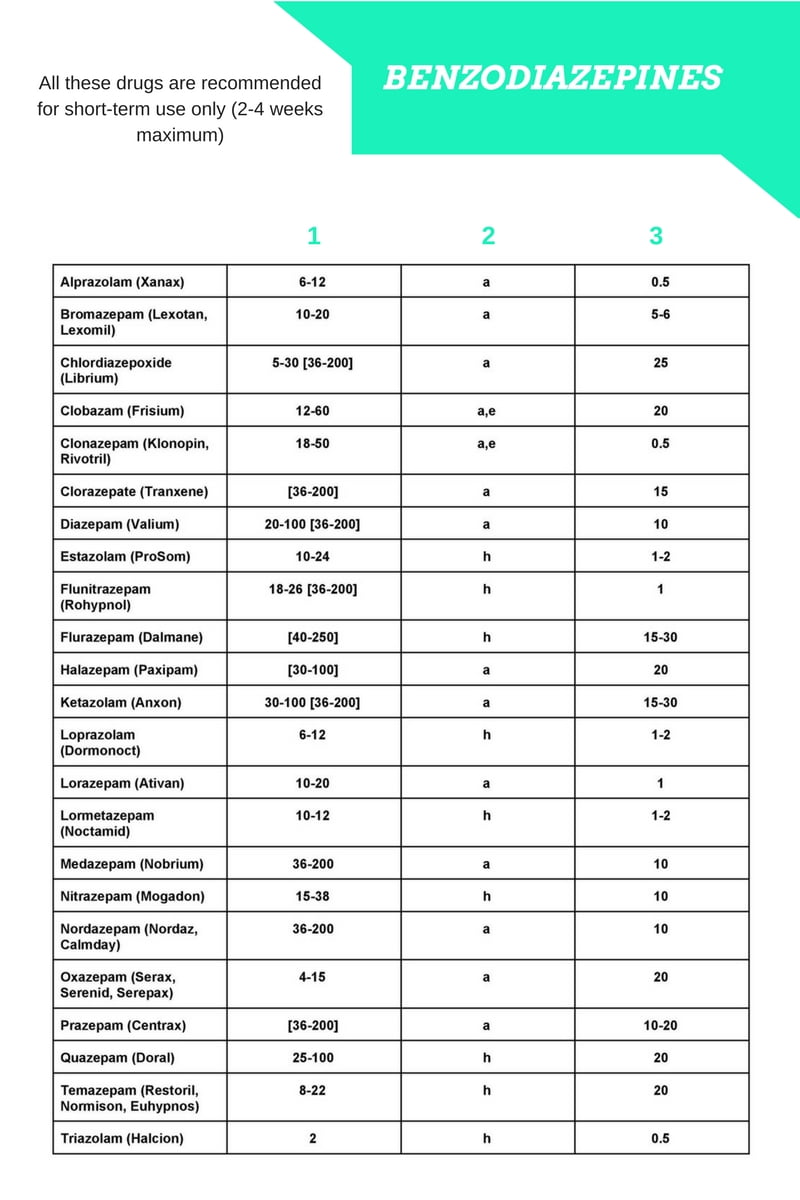 In benzodiazepine studies and medical literature the term low dose is subjective, or often used without any quantifying amount. There is no agreement on the exact range of dosages intended by this term and seems to be used in an arbitrary fashion.

Because certain benzodiazepines are dosed in amounts that may sound “low dose,” such as lorazepam (Ativan), clonazepam (Klonopin) and alprazolam (Xanax) the dosages can be misleading. For example, 0.5 milligrams of Klonopin, 1 milligram of Ativan and 0.5 mg of Xanax are equivalent to 10 milligrams of Valium. This means that 0.5 mg of Klonopin may likely require a lengthy taper for safe cessation.

The deceptive marketing has been effective. Why is this misinformation occurring? One reason might be that doctors have been slow to recognize or differentiate the differences between the many benzodiazepines, both in rates of elimination and in relative potency:

There is considerable individual variation in how people react to benzodiazepines. There are also vulnerable populations (e.g., the elderly) who have reduced metabolism of the benzodiazepines, making them especially susceptible to the sedative effects of the drugs (causing falls and fractures, mental confusion, cognitive impairment, etc.). In addition, there are subtle differences in the pharmacological profiles of the different benzodiazepines, and the equivalences do not always “work” at higher doses (e.g., in clinical experience, diazepam is rather more sedative than lorazepam which is more anxiolytic) when switching between the drugs. People also have variations in the speed at which they metabolize drugs (e.g., fast-metabolizers, slow-metabolizers), but on the whole the equivalences apply generally—except possibly in the case of benzodiazepines which have active metabolites such as diazepam where the half-lives of these can vary from 36–200 hours. 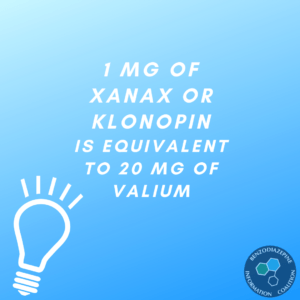 So while, say, 0.5mg of Xanax (alprazolam) sounds like a “small dose” or “low dose,” compared to someone taking 10mg of Valium (diazepam), it is not; they are, in fact, equivalent. Someone taking 4mg of clonazepam (Klonopin), which is the maximum recommended dosage for panic disorder, may have no idea that they are being prescribed the equivalent of 80mg of Valium! Four certainly sounds “small” compared to eighty; in reality, they are essentially the same thing (or equivalent). And while, for some, 0.5mg of Xanax (alprazolam) might be efficiently metabolized without notable effects, for others it may not be, causing adverse effects.

Low Doses Are Not Safe Doses

According to Professor Heather Ashton, a medical expert on benzodiazepines and withdrawal, a safe dose to stop Valium after approximately a 40 week taper is 0.5 -1 mg of Valium (or its equivalent). It is important to note the lowest doses available for Klonopin, Ativan and Xanax are at least 10-20x more potent than the safest, lowest recommended dose to stop a benzodiazepine.

The term low dose can be very misleading to patients. There are two possible common outcomes to a low dose that are concerning. The first being the development of tolerance to the “low dose” which may lead to withdrawal symptoms often mistaken as the return, worsening, of the patient’s underlying condition. It is frequently misdiagnosed as a new condition. This frequently results in prescribers increasing the dose and/or prescribing additional medications. The second outcome is cessation, which can cause problems and disability when a benzodiazepine is taken at either a low dose or a higher dose. The feelings of security of believing one is on a low dose are often found to be false, and the patient ends up confused, on multiple medications believing they cannot be experiencing symptoms on such a low dose, or surprised to find out their low dose wasn’t that low at all. All patients deserve informed consent, regardless of the perception of the size of the dosage, because every dosage has the potential for tolerance, dependence and long term injury.