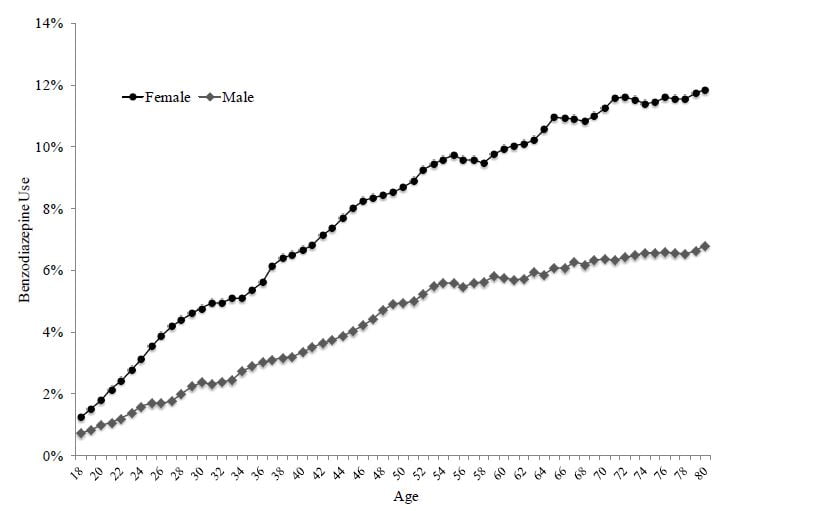 Percentage of the U.S. population in 2008 with any benzodiazepine use, by sex and age. Source: IMS LifeLink®Information Assets-LRx Longitudinal Prescription Database, 2008, IMS Health Incorporated.

Despite widespread concerns surrounding their use have abounded for many decades, benzodiazepines are still widely prescribed in most industrialized countries and diazepam is reputedly one of the most widely prescribed drugs of all time.

A research paper published in 2016 by the American Journal of Public Health shows that, between 1996 and 2013, benzodiazepine prescriptions and overdose mortality have increased considerably in the US.

The percentage of adults in the United States who filled a benzodiazepine prescription per year [from 1996 to 2013]  increased by about 30%, from 4.1% in 1996 to 5.6% in 2013. In addition, the amount of benzodiazepine medicine — whether Xanax, Valium, Ativan, Klonopin or other drugs in this class — in a prescription doubled over this time period. Anxiety was the most frequent reason these medications were given, accounting for 56% of prescriptions [3].

In 2006, a restrictive drug policy was introduced by one major insurer, for nursing home residents in the USA, excluding all benzodiazepines from reimbursement. Interestingly, this policy change led to an immediate reduction of circa 33% in their use in patients for whom no supplemental coverage for these medicines was available [1]. However, the same authors failed to find a clinical benefit for this reduction in use, possibly reflecting increased use of Z-drug hypnotics and/or the limited outcome measure that was studied (hip fracture). Replacing one drug dependency problem with another is not likely to provide a long-term solution to inappropriate prescribing practices.

In the USA, Simon and Ludman [5] reported that 30% of 129 outpatients aged ≥60 with mixed diagnoses who received benzodiazepines continued its regular use for more than 2 months in primary care settings in western Washington State. In the HARP study, also in the USA (Harvard/Brown Anxiety Disorder Research Project), benzodiazepines were prescribed to 50% of all patients diagnosed with generalized anxiety disorder and up to one-third of those prescribed these drugs were taking them for as long as 12 years [6].

A 2019 study entitled “Benzodiazepine Use and Misuse Among Adults in the United States,” was published in the journal Psychiatric Services. It found that a  total of 30.6 million adults (12.6%) reported benzodiazepine use in the past year—25.3 million (10.4%) as prescribed and 5.3 million (2.2%) misuse. That figure is almost double the between 4-6 percent estimated by studies in 2013 and 2014, although the authors of this study point out that the differences may be due, at least in part, to differing survey methodologies. Results of this study also revealed that adults ages 50-64 had the highest prescribed use (12.9%) [8]

Another 2019 a study entitled “Patterns in Outpatient Benzodiazepine Prescribing in the United States,” was published in the journal JAMA Network Open.  The percentage of outpatient medical visits that led to a benzodiazepine prescription doubled—increasing from 3.8% to 7.4%—from 2003 to 2015. The prescribing rate amongst psychiatrists remained unchanged at about 30% of visits. Otherwise, the prescribing rate increased among all other physicians—the rate among primary care doctors more than doubling, increasing from 3.6% to 7.5% of visits.The benzodiazepine visit rate increased by 6.9% for anxiety and depression; by 1.9% for neurologic conditions; by 4.9% for back and/or chronic pain (both non-FDA-approved indications); and by 2.6% for other conditions. Use did not change for the indication of insomnia. The rate of co-prescribing benzodiazepines with opiates quadrupled from 0.5% in 2003 to 2% in 2015. [9]

In the study, Gaining insight into benzodiazepine prescribing in General Practice in France: a data-based study, 12.5% of patients older than 18 were prescribed BZDs at least once during 2006 and the average (SD) was 2.6 (2.4) BZD prescriptions/patient/year [2].

In a French telephone survey of patients in 2001, the prevalence of benzodiazepine prescribing in a cross-section of community-dwelling adults was 7.5%, and factors associated with increased use of these drugs included advanced age, female gender and social disadvantage/unemployment [1]. Again, duration of usage commonly exceeds prescribing guidelines, with more than 75% of users being prescribed these drugs for more than 6 months [1].

“In Australia, a decrease in benzodiazepine prescribing was achieved in the 1990’s following the issuing of revised prescribing guidelines and a public awareness campaign. However, since these campaigns ended, utilisation started to creep back up with a 21% increase in use from the years 2000–2006 observed in an elderly, socioeconomically disadvantaged population [1].”

In Norway, benzodiazepine use in the primary care setting was investigated with over 3,000 prescriptions written by GPs in a 2-month period being analyzed [1]. This indicated increasing dose with age, a higher proportion of prescribing to females, and a high percentage of repeat prescribing (82%), all of which point to a lack of compliance with National guidelines

A population-based study in Finland found that one-third of home-based patients older than 75 years were using either benzodiazepines or related drugs chronically as sleeping aids or anxiolytics [1], while follow-up studies found that many of these users were taking these drugs on a long-term basis [2].

“In Ireland, a recent survey of potentially inappropriate prescribing in a population of over 70 year-olds included long-term (> 1 month) prescription of benzodiazepines in the elderly as a poor professional practice indicator [3]. Those authors identified high rates of long-term benzodiazepine use (13% in women and 5% in men) among this population as a major contributor to the overall statistic that one-third of the Irish population in this age-group are prescribed at least one potentially inappropriate drug on the basis of European best practice criteria. Only proton pump inhibitors and non-steroidal anti-inflammatories displayed a worse prevalence of inappropriate prescribing patterns.”

“In Ireland, a recent report commissioned by the government found that the number of prescriptions issued for benzodiazepines increased significantly in the period 2002–2008, despite an earlier report in 2002—the goal of which was to significantly reduce inappropriate use of benzodiazepines and attendant dependence on these drugs [1, 2]. Moreover, a recent ten-year follow-up study of community-dwelling older adults in which inappropriate psychotropic prescribing was assessed using Beer’s criteria, reported an overall prevalence rate of 6.5% for benzodiazepine use in those aged >65 years and a 27% inappropriate psychotropic prescribing rate for those over 75 years, the vast majority of which was accounted for by benzodiazepines [5]. In the institutional setting, chronic use of benzodiazepines is of particular concern in psychiatric hospitals and in residential nursing homes. One Irish study in which sequential admissions to a psychiatric hospital were monitored, indicated that 47% of patients were prescribed these drugs, usually without defined clinical need [4].”

“In Denmark, it is illegal to write a benzodiazepine prescription exceeding four weeks, after which a full medical re-evaluation must assess their continued need [1].”

“BZD-use has been markedly reduced in the Danish population from 1997–2008; however, one in four people aged 75–85 years and almost one in three of patients over 85 years still use BZDs [2].”

In the Netherlands, circa 300 patients from 32 GP practices were recruited, half of whom were short-term benzodiazepines users and half long-term users. The long-term users were more likely to be older, to live alone, to be less well educated, to have a more serious mental health profile for which they had received prior treatment, to have attended hospital consultants more frequently, and to have a lower general health status [2,3].

A Dutch study, which looked at chronic users in three settings and applied both DSM-III-R and ICD-10 criteria for dependence, found that 40% of GP patients, 63% of psychiatric patients and 82% of those attending self-help groups were dependent on these medications [1]. In the same study drug type, age and educational attainment were also identified as predictors of long-term use.

In Hong Kong, a policy change including benzodiazepines as dangerous drugs, introduced in 1992, resulted in a 50% and a 10% reduction in the mean annual number of benzodiazepine prescriptions per person in the general and psychiatric populations, respectively, over the period 1991 to 1994 [1].

“In Sweden, the prescription of long-acting benzodiazepines to a very elderly population of nursing home residents (mean age 85) was used as a poor prescribing indicator [1]. An inappropriate prescribing rate of 16% of patients was detected, with a number of prescribers per resident being positively correlated with poor prescribing performance.”

“In a grouping of eight GP practices in Northern England, who were audited vs. their own good prescribing standards, only 31% met the acceptable standard of benzodiazepine prescription volume [1]”

In the UK, benzodiazepine prescribing is reported to be falling with the Z-drugs (zolpidem, zopiclone, and zaleplon) taking over, but the numbers being prescribed drugs for hypnosis are still very high and are not in alignment with guidelines issued by the UK National Institute of Clinical Excellence [2].

In the North of England, the vast majority of GPs surveyed viewed benzodiazepine use as problematic, despite its prevalence in their communities [3].

The 2014 Hospital Admissions Drug Poisoning Report, published by the NHS in England, has again shown that prescription drugs are causing people/society more harm than illegal drugs.

There are an estimated 1.5 million people suffering from doctor induced BZ drug dependency in England alone (with antidepressants now a major problem as well) − the number worldwide must be staggering. [4]

In the ESEMeD study, psychotropic drug use across six European countries (Belgium, France, Italy, Germany, The Netherlands and Spain) was investigated. The authors found that anxiolytic medications were the most commonly used psychotropic drugs in these countries with an overall prevalence of 9.8% and concluded that these drugs were being used non-specifically for inappropriate disorders including depression [1]. Similarly, a four-country survey across France, Germany Italy and the UK found a particularly high rate of hypnotic prescribing in France (2.5%) with temazepam, flunitrazepam and nitrazepam accounting for over 40% of all hypnotic prescriptions [2].

In Italy, trends in antidepressant and benzodiazepine use were tracked over a nine-year period and while antidepressant use tripled, benzodiazepine use was relatively stable [2]. However, two subsequent studies in Italy both documented a high prevalence of chronic use (mean of over 2 years) without increased dosage being used to counteract tolerance [3.4]. The prevalence rate of chronic benzodiazepine use for more than 1 year was also high in Italy Specifically it was found to be 90% in 177 patients aged 60 or older with anxiety disorders Balestrieri et al. [1]

A ten-year follow-up population-based study from Canada found that despite increased awareness of, and warnings regarding, risks associated with long-term use of benzodiazepines, rates of potentially inappropriate prescribing had changed very little over the period 1996–2006, with 8.4% of subjects using benzodiazepines and 3.5% doing so long-term [1].

A comparison study of benzodiazepine use in Canada and Australia, in which dispensing data was interrogated, found that usage in Canada was over twice that of Australia with a larger number of different drugs being used in Canada and a preference for longer-acting agents in Australia [2].

In Japan, a large cross-sectional review of psychotropic prescriptions in circa 800 patients with neurotic disorders found that the proportion of subjects being prescribed benzodiazepines for anxiolysis without antidepressants increased with age [1].

Statistics show that Japan has the highest consumption rate in the world. However, benzodiazepines are not included at medical school training for doctors who are largely ignorant on the subject. They prescribe excess amounts, over prolonged periods and poly-prescribe, which is resulting in grave suffering for many unsuspecting victims with absolutely no specialized facilities available to help them.

In Thailand, 45% of GPs surveyed admitted that their prescription of benzodiazepines in the previous year had been excessive: “Practitioners agreed that prescribing should be less than one week (80%); or from 1 week to 1 month (47%); or 1 to 4 months (16%); or 4 to 6 months (5%) or more than 6 months (2%). Twenty-five general practitioners (45%) accepted that they used benzodiazepines excessively in the past year [1].”

A survey of community hospitals in a rural area of Thailand demonstrated that 15% of all adult outpatients received benzodiazepines. These results seem to agree with a previous questionnaire survey among Thai GPs, which found that approximately 50% of them prescribed BZDs for more than 25% of their patients [1].

Although many developing countries allow BZDs to be sold over-the-counter in pharmacies, a literature review of BZD use in Brazil found that the vast majority of BZD consumption was due to medical prescription [2].