Benzodiazepines are frequently prescribed to women, often without fully informed consent. They can greatly alter their lives, disrupting hormones, menstrual cycles, pregnancies and parenting. They can lead to hysterectomy, miscarriage and birth defects.

The female reproductive system is saturated with endogenous (naturally occurring, produced by the body) biochemicals – hormones, neuroactive steroids and their metabolites – that act as natural sedatives and benzodiazepines in the brain and central nervous system.

They include, but are not limited to:

As a result of fluctuations in these biochemicals, there occurs a phenomenon of both a progesterone withdrawal syndrome and a GABA-A receptor desensitization effect that is similar in nature to the benzodiazepine withdrawal syndrome (BWS). It occurs in some women who are affected by PMS, PMDD, postpartum depression/psychosis, menopause and hysterectomy, and in sedative-hypnotic withdrawal syndromes.

This neuroactive-steroid connection may prove to be involved in sedative-hypnotic actions, aging, stress, and alcohol abuse. The steroids derived from progesterone may help explain the symptoms of pregnancy and menstruation, and perhaps one of psychiatry’s oldest conundrums: why men and women have such a striking difference in the incidence of anxiety and mood disorders. – George Koob, Ph.D., a professor of neuropharmacology at the Scripps Research Institute in La Jolla, California.

Because of these fluctuations in the neurosteroids and their metabolites, a temporary increase in concentrations of a molecule known as alpha-4 is produced, and this molecule will temporarily blunt the GABA receptor’s sensitivity to GABA (and GABAergic sedatives, including benzodiazepines) until the hormonal state changes or fluctuates again. The phenomenon of increased alpha-4 can occur in men experiencing physical stress, but it is naturally more common at certain points in female menstrual and reproductive endocrine cycles.

Abrupt discontinuation of use of sedatives such as benzodiazepines and ethanol can also produce PMS-like withdrawal symptoms.

Progesterone, allopregnanolone and many of their metabolites were found to be cross-tolerant with benzodiazepines, so fluctuating levels of these naturally occurring biochemicals can make for a bumpy ride for women during a benzodiazepine taper and recovery process. In a non-benzodiazepine affected individual, the interactions of these naturally occurring bodily processes aren’t often noticed, and if they are, it’s usually evident in women who suffer from PMS, PMDD, menopause, and post-partum and post-hysterectomy complications. It can look a lot like the benzodiazepine withdrawal syndrome. In women with epilepsy who are susceptible to the pro-convulsant effects of estrogen (possibly due to its glutaminergic excitatory effects on the central nervous system) seizures as a consequence of catamenial epilepsy (an epileptic seizure disorder associated with the menstrual cycle) may result. With this in mind, hormone replacement therapy should be approached with caution in women suffering BWS, hormonal disorders and in women with epilepsy. An understanding that progesterone is a GABAergic biochemical which can have a withdrawal syndrome similar to BWS should be known. Some women may prefer to taper when they discontinue progesterone therapy. 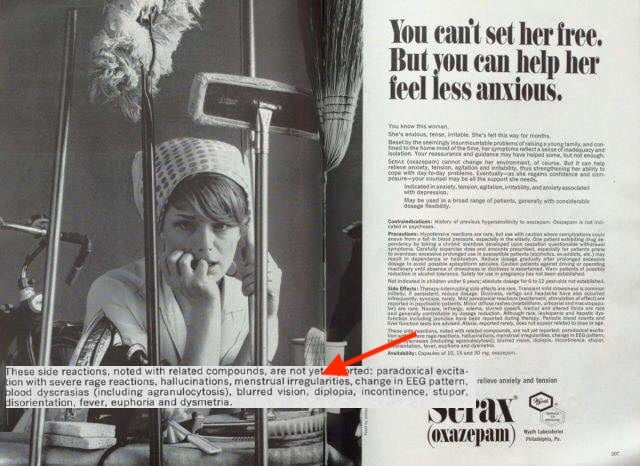 Benzodiazepines have long been documented to cause menstrual irregularities in some patients and, in spite of this, they are rarely considered in the differential diagnosis by a medical provider when a woman presents with irregular periods. Because of this, the patient may be put on hormones she does not need or, in more extreme cases, may be subjected to an unnecessary hysterectomy. Many women in the benzodiazepine support communities who were experiencing these menstrual irregularities report that tapering off of their benzodiazepine resulted in the resumption of normal menstruation.

Unsurprisingly, babies born to physically dependent mothers suffer from potential birth defects and complications. Benzodiazepines are no exception.  Benzodiazepines can increase risk of miscarriage, birth defects and complications during pregnancy and breast-feeding. Benzodiazepine pregnancy risks are categorized differently in every country. For example, the FDA has commonly prescribed benzodiazepines like Ativan, Valium, Klonopin and Xanax categorized as either D, meaning studies have been completed on the drug, and it has been proven to carry certain risks. Risks to a developing fetus are numerous.

Discovering that one is pregnant while prescribed  benzodiazepine can be very stressful and traumatic, especially if the prescription is long term (more than 2-4 weeks) and physical dependence has developed. Most women are not provided accurate informed consent at the time of prescription and are unaware benzodiazepines can be disabling to stop.

While pregnant women are often encouraged to taper off of their benzodiazepine, it may be already too late to avoid damage by the time the pregnancy is known. A safer taper off benzodiazepines may take many patients many months to years, and fast tapers can be very dangerous and difficult for many women. This  often leaves women with the impossible task to accomplish a slow taper during a pregnancy, or to be forced to accept the risk of fetal exposure to benzodiazepines.

From the Ashton Manual:

Benzodiazepines actively cross the placenta and, when taken regularly during pregnancy (even in therapeutic, prescribed doses) can cause neonatal complications. The foetus and neonate metabolise benzodiazepines very slowly, and appreciable concentrations may persist in the infant up to two weeks after birth, resulting in the “floppy infant syndrome” of lax muscles, oversedation, and failure to suckle. Withdrawal symptoms may develop after about two weeks with hyperexcitability, high-pitched crying and feeding difficulties. Benzodiazepines in therapeutic doses appear to carry little risk of causing major congenital malformations. However, chronic maternal use may impair foetal intrauterine growth and retard brain development. There is increasing concern that such children in later life may be prone to attention deficit disorder, hyperactivity, learning difficulties, and a spectrum of autistic disorders.

Infants exposed to benzodiazepines throughout pregnancy have been found to have a general delay in mental development up to 18 months of age. The medications are possibly linked to a higher risk of microcephaly (a small head circumference that is associated with lower IQ). 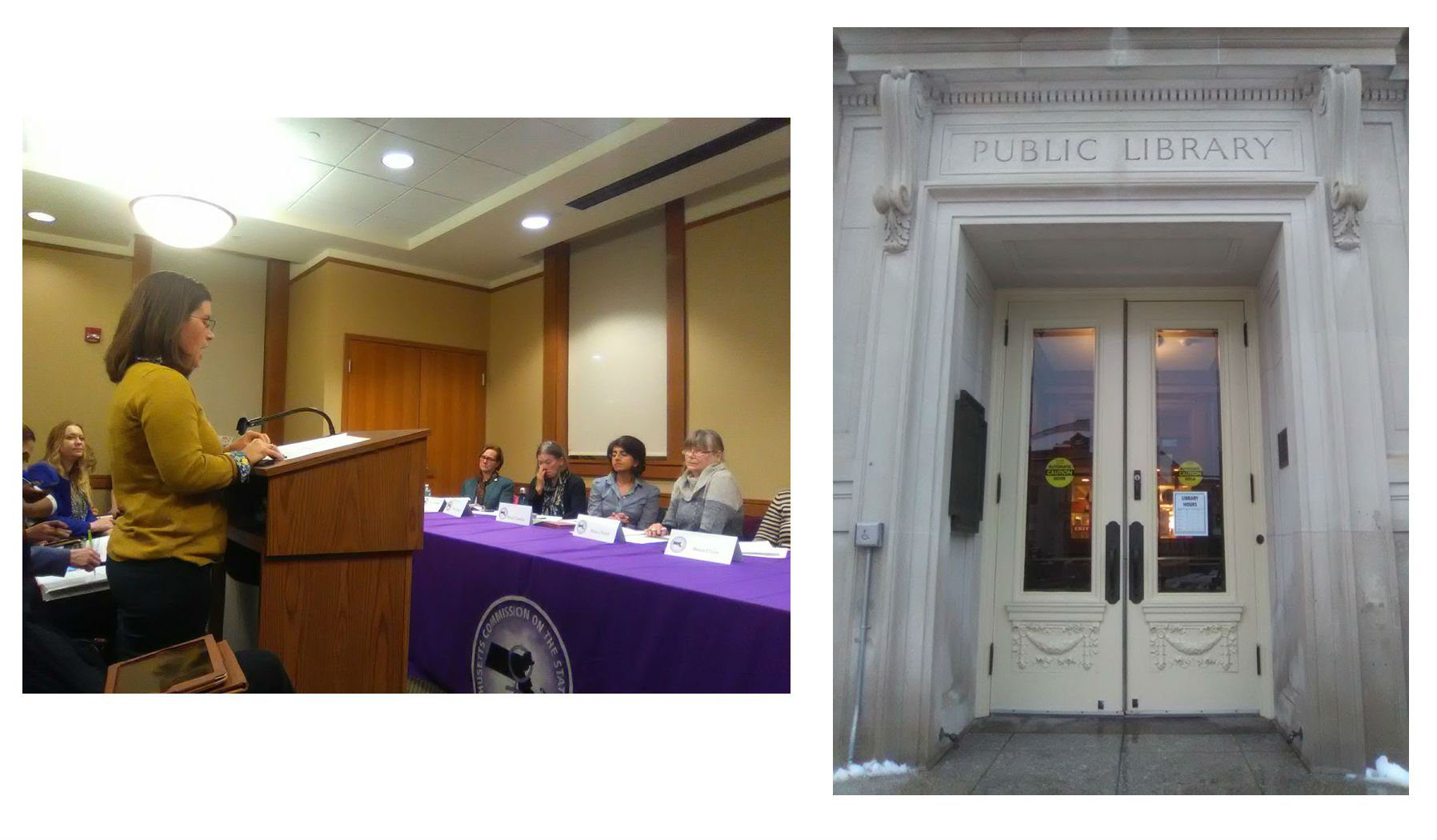 On January 24, 2017, inspired by Sonja Styblo, Christina Souza (pictured) and Lauren Omartian presented testimony on the toxicity of benzodiazepines to the Massachusetts Commission on the Status of Women. A writer and photographer from the Sentinel & Enterprise covered the hearing held at the Leominster Public Library.